The Standard Model (SM) of particle physics has been successfully tested over a wide range of energy scales, but it fails to account for some key properties of the observed universe, such as dark matter (DM) and dark energy. New physics beyond the SM may exist at high-energy scale or in a weakly coupled “dark sector”, which may naturally contain light new particles, including a dark matter candidate. One of the most interesting and motivated portals to the dark sector is given by the mixing of the photon with the so-called dark photon (A’), a new U(1) gauge boson mediating abelian gauge interactions in the dark sector. There is a unique opportunity today at the Fermilab Intensity Frontier Facility to directly search for dark photons in high-energy proton-nucleus collisions.  This search can be conducted during the same physics run as FNAL experiment E1039.

Theory has recently been developed to identify the signal of dimuons from dark photon (and dark Higgs) decays at Fermilab. A new dedicated displaced dark photon trigger detector was built and installed in the Fermilab SeaQuest/E906 experiment in early 2017, along with a 10-fold improvement of the data acquisition bandwidth, and successfully took 5 days of commissioning data at the end of the E906 experiment run in July 2017. Preliminary physics data analysis was carried out in 2018 and confirmed the performance of trigger detector efficiency above 95%, exceeding the design goal of 90%.  We will take dark photon data during the SpinQuest/E1039 experiment starting, summer 2019.  In May 2018, E1039 was approved by the DOE for 2 years of data taking, 2019 – 2021. We will be ready to take high-statistics dark photon search data parasitically with E1039 in coming years to produce the world’s best measurements of dark photons at Fermilab in the mass range 200 - 2,000 MeV. 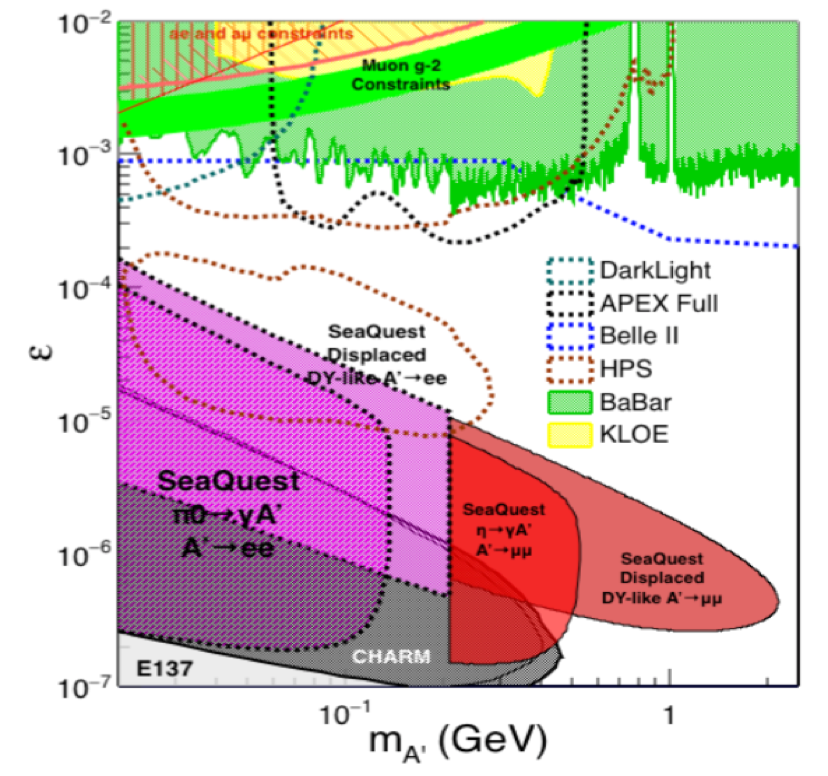 Here the figure shows the possible sensitivities for a dark photon/ρ’ search at SpinQuest after 2 years of parasitic running with E1039 experiment with expected POT 1.4 x 1018.  The sensitivity contours of dark photon searches at SeaQuest with μμ (red shaded area) and ee final states (purple shaded area), compared with other experiments, where the solid lines show the existing experiments and the dashed lines stand for future experiments.

There is a worldwide race in the search for dark photons and dark Higgs particles. If dark photons (dark Higgs) were observed, they would revolutionize our understanding of the fundamental structures and interactions of our universe. The unique Fermilab opportunity opens the door for a search directly for dark photon and dark Higgs production in a highly motivated parameter space in high energy proton nucleus collisions using the

existing SeaQuest-SpinQuest dimuom spectrometer.  The resulting data would provide the world’s best sensitivity to dark photon (dark Higgs) masses between 0.2–10 GeV/c for the next decade.